According to Merriam Webster online, a diptych is either

In photography, it is points two and three that apply as the term refers to two matching images or a series of pictures joined together.

I was introduced to the technique in a recent post on the Digital Photography School website in which the author demonstrates how a photographic Diptych can be used to tell a story. Having driven several times past this ageing tractor, seemingly abandoned in a farmer’s field here in the Dordogne, I decided to photograph it in order to make my own diptych.

After reviewing the suggested aspect ratios for making a diptych, I chose to crop the two images in a 3 x 2 ratio and place them one above the other with a wide angle shot on top and a close up of the detail on the bottom. The resulting image is here – 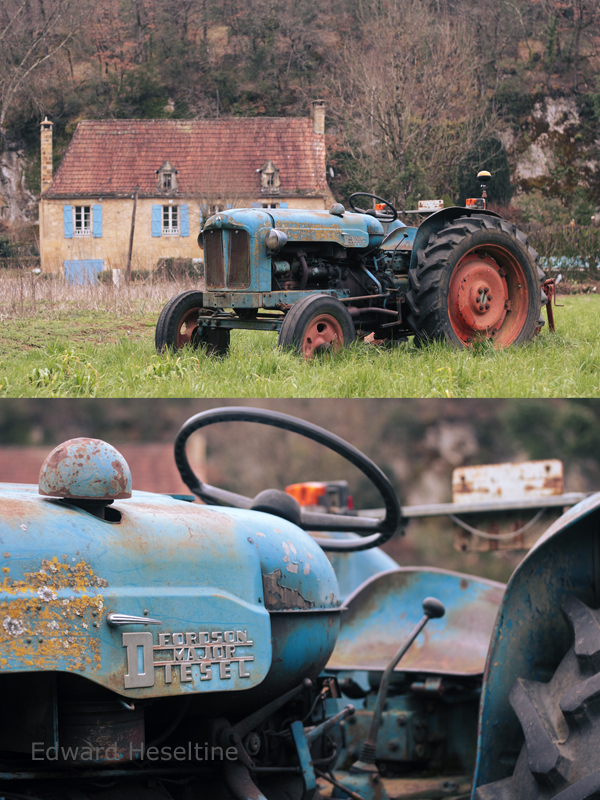 For me, the diptych is telling the story of the tractor by initially presenting it within its surroundings and subsequently zooming in on the details that reveal more about the identity of the tractor itself and its current state of decrepitude.

Whilst taking the photos, the owner’s wife appeared from her house to check on the stranger who had trespassed onto their field to get closer to their tractor i.e. me. Before leaving, I wandered over to re-assure them that I was a harmless Englishman interested only in taking photographs of their abandoned machinery and nothing more. Fifteen minutes later, I had the real story of the tractor as well as a short biography of its owner.

Until last Autumn, the tractor was in service for odd jobs around the farm until the owner drove it too close to the stream at the back of the property and both he and the tractor ended up in the water. The tractor was subsequently removed from the stream by crane and placed in its current position, ready to be recomissioned. In the meantime, the owner’s health sadly deteriorated (not as a result of the accident as far as I understood) and he is no longer physically able to work on getting the machine moving again. Consequently, it has spent the last winter outside in the spot where the crane left it.

The owner’s wife believes that it is shameful, as the surrounding neighbours must think that they have no sense, leaving their precious tractor outdoors all winter. I told her that I personally feel that it is charming and helps add character to the area, especially considering the attractive stone house on one side of the field and a small château perched on a rocky outcrop to the other side. She didn’t seem convinced but I think the tourists passing through this summer would agree with me.

What do you reckon? Charming antique or disgracefully abandoned machinery?