Spring is well under way and plants and flowers in the Perigord Noir corner of the Dordogne are all flourishing madly. My intention for this week was therefore to take some macro shots of the beautiful displays in the jardin publique at Sarlat.

I headed over to the gardens on two separate occasions, only to be thwarted by April showers. Unwilling to set my camera up on a tripod in the rain, I forgot the photography and headed into town to carry out a few errands. Ironically, it was at that point that I spotted the scene below and found myself instantly instantly drawn to making a picture. 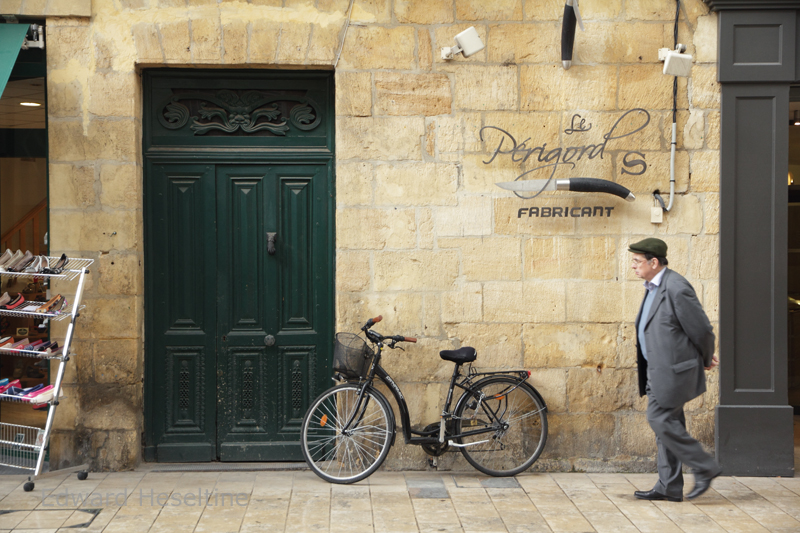 Initially, it was the doorway and the bicycle that caught my eye. The large wooden door with ornate decoration and iron fist knocker is typical of town buildings all over France. The sit-up-and-beg bicycle with a step through frame and basket mounted over the front wheel is also synonymous with rural France. Positioned against the golden coloured sandstone wall and wrought iron sign, the whole scene sums up Sarlat for me. As I’ve said elsewhere in the blog, Sarlat is a medieval walled city, built almost entirely from local sandstone, located deep in rural France.

The man walking by was the icing on the cake, the prime example of a local Périgourdin Frenchman in both attire and manner. It is easy to imagine this picture having been taken any time in the last 50 years (except that it’s a digital image being published on the web!).

I’m not usually a fan of ‘street photography‘ as I find it’s often non-contextual and doesn’t tell the viewer anything about the place in which the photograph was taken. However, one site I do follow is ‘A Daily Dose of Imagery‘ and find his street photography very good as it really shows everyday life in Toronto. For me, this image shows a real scene from life in the Dordogne and that’s why I like it so much.

As always, let me know what you think using the comments below and thanks for looking.